In a very keenly fought contest the Under 14s were narrowly edged out by a young, yet competitive Worcestershire side by 3 points to 2 points.

The first matches saw some excellent golf with four birdies by the Staffordshire duo earning a 3&2 win.

The next three matches all went to the 18th hole with Staffordshire narrowly losing out in each.

The final match also went to the final hole, this time however, a chip in by Noah Fox earned the home side a point.

Our thanks go to Sedgley Golf Club who were excellent hosts, having prepared the course in excellent condition.

Congratulations to Ed Whatmore who picked up the prize for the lowest gross score over 36 holes with a score of 118, 10 over par. 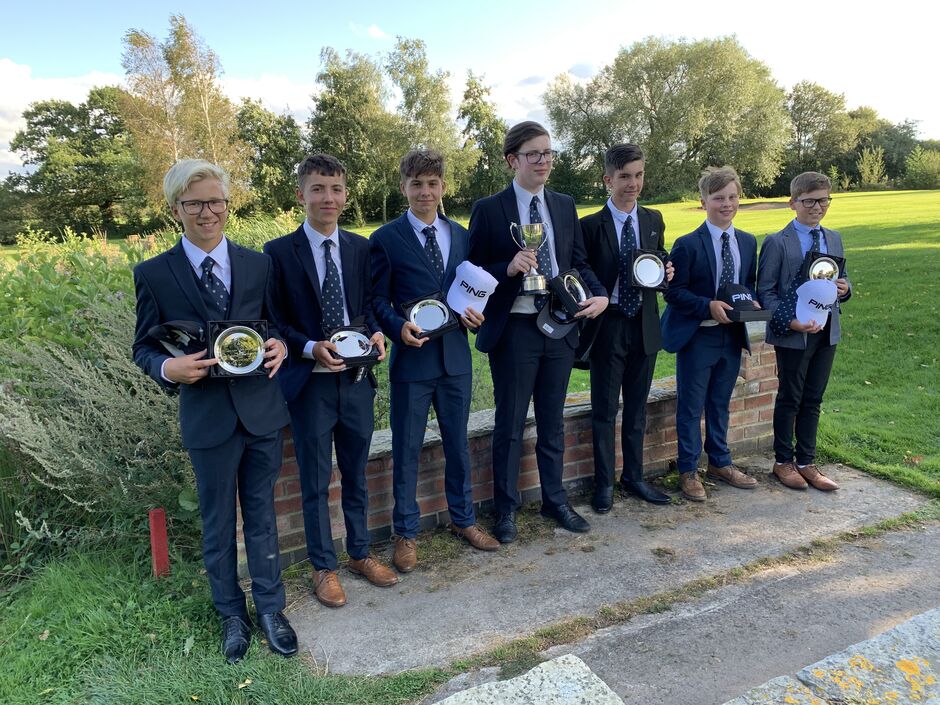 Staffordshire, hoping to go one better than last year, took on Derbyshire, Nottinghamshire and Warwickshire in the Midland 4 Counties Under 14 Championship.

Friday, the boys started well against Derbyshire. The top two matches both went to the 18th hole, with one win for either side. 3 of the final matches were won comfortably and a halved match left Staffordshire with a comfortable 9 to 3 points victory.

The afternoon saw a hard fought match against Nottinghamshire, with the boys knowing that a victory would make them the competition winners. The top two matches were comfortably won by Staffordshire with 5 and 4 and 3 and 2 wins. The third match was narrowly lost on the 18th green. The fourth match was won 6 and 5 leaving Staffordshire 1 point from victory. The fifth match delivered the 1 point and a 7 to 5 point victory.

Staffordshire were left to celebrate a wonderful championship. A true team effort!

My thanks go to all the parents and the Junior Committee who came along to support the team over the two days. Special thanks go to Andrew and Pippa Dathan, who as always were there to cheer the team on. 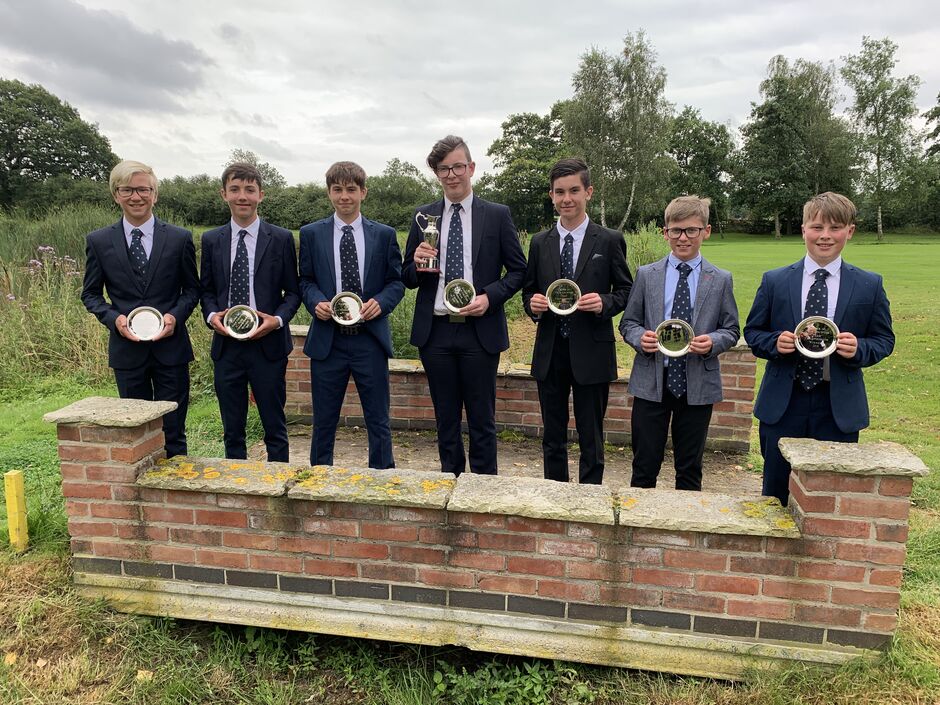 In a closely fought contest the Under 14s came out eventual winners by 3.5 to 2.5 points. The first, third, and sixth matches, Staffordshire won convincingly. The second match was a closely fought one going to the 18th hole, only to lose out. The fourth match also went to the 18th, Staffordshire gaining a vital half point to ensure the final result. 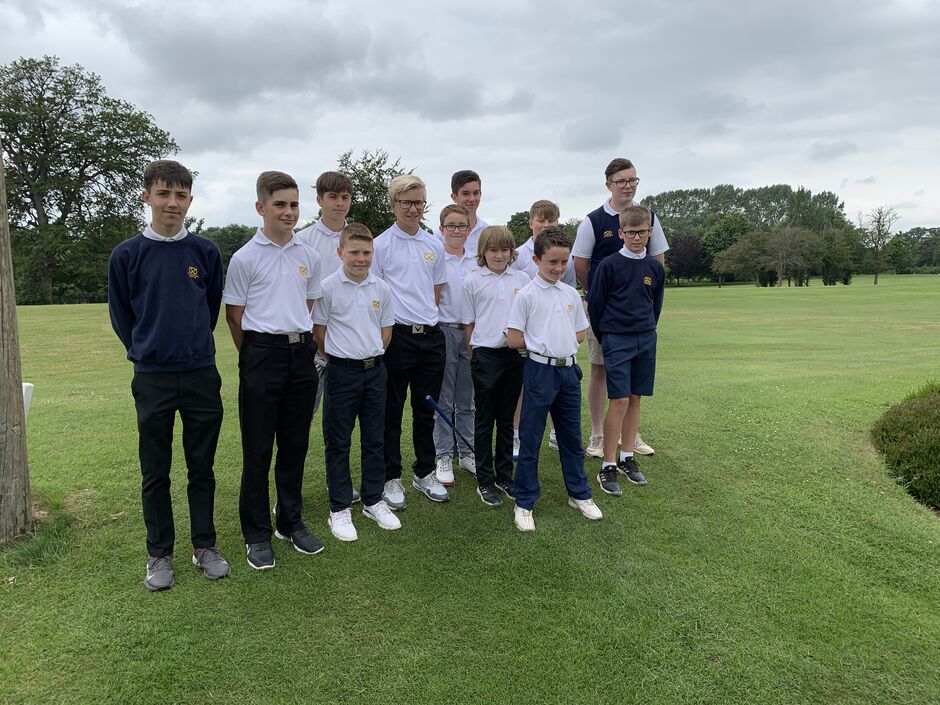 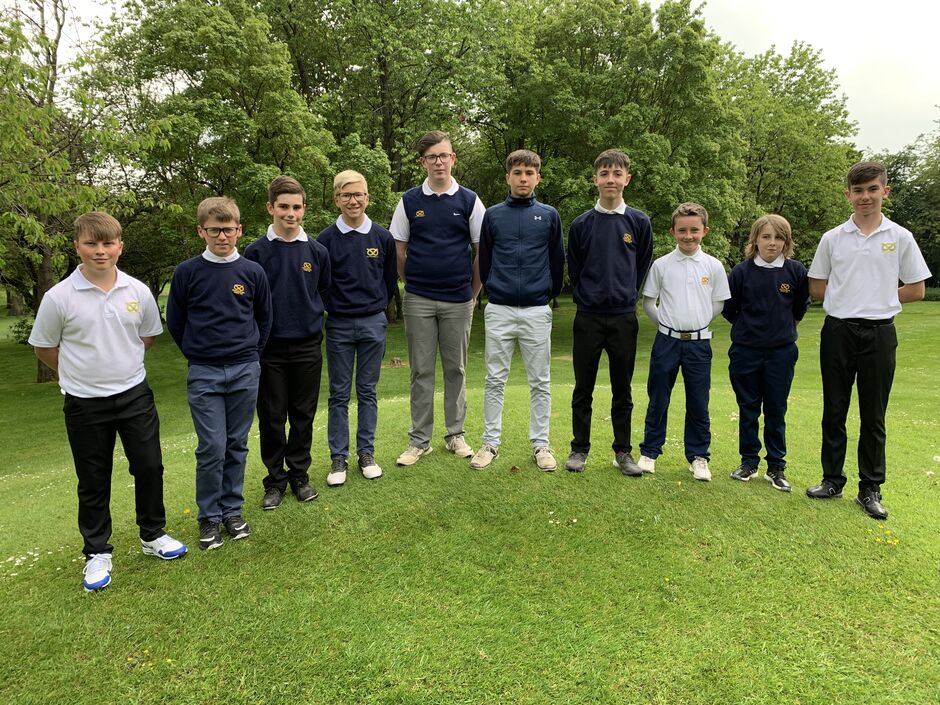 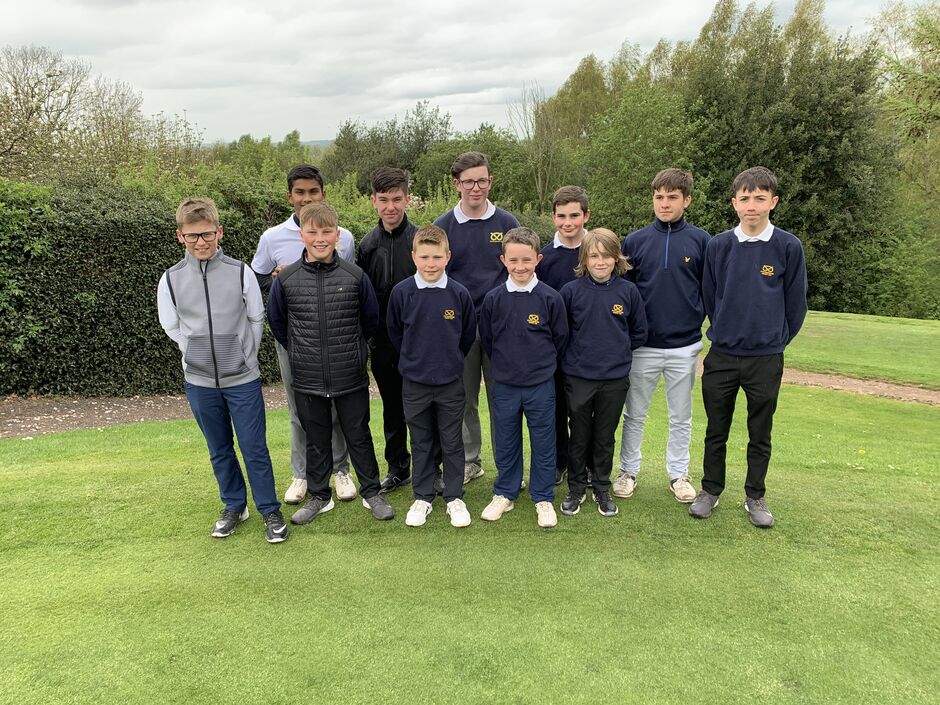 Staffordshire welcomed Shropshire and Herefordshire to a wet, windy and cold Burslem. Burslem Golf Club produced a good test of golf for the boys. The top game went Staffordshire's way. The second game was narrowly lost on the 18th hole. The fourth game went to Shropshire and Herefordshire, the fifth and sixth games were won and lost respectively. The final result hinged on the third game which went to the 18th hole. Unfortunately for Staffordshire the game was lost on the 18th. The final match score ended with honours even at 3-3. 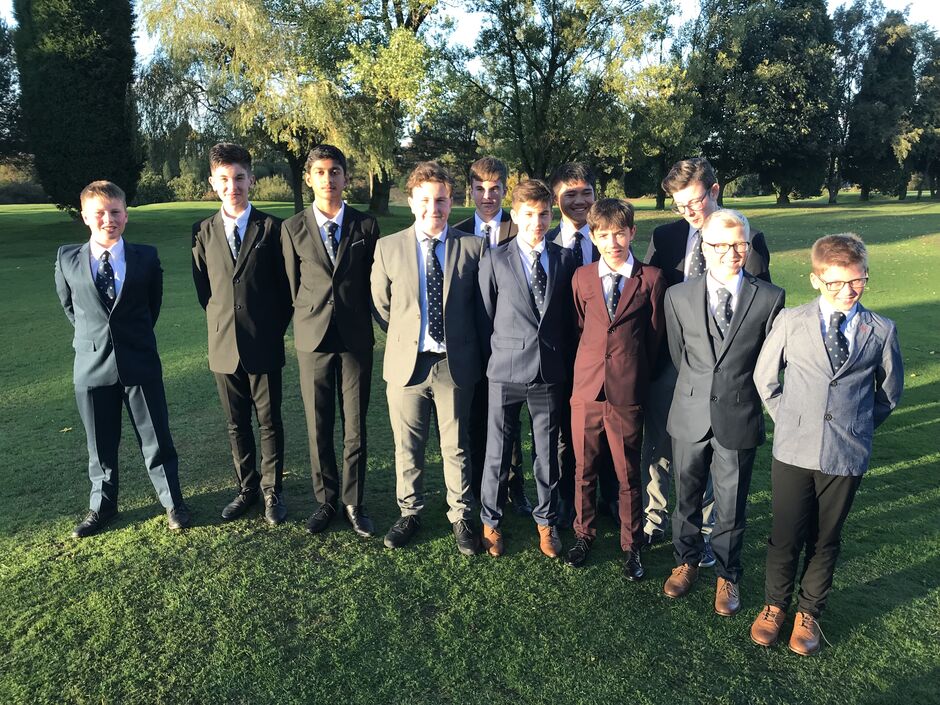 In a closely contested match, Derbyshire just edged out Staffordshire by 3 points to 2. The Staffordshire boys fought hard but in the end they fell agonisingly short. 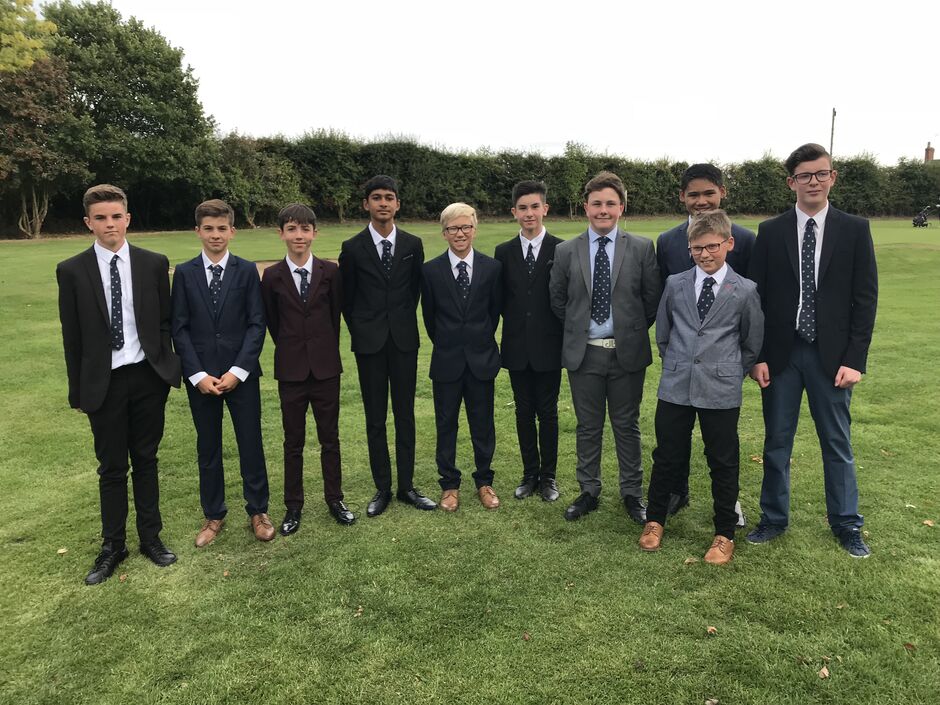 Staffordshire Under 14's managed to win a close match against Worcestershire. With four games going to the 18th hole it was 'nip and tuck' all the way. Spencer played a bunker shot on the 18th to 12 inches to halve the opening match. This was soon followed by an equally impressive shot from the same bunker by James to halve their match. Needing a half in the final match for a win, Josh missed the green but managed to chip to 9 inches to win 2 up. A fine performance by the Staffordshire Boys who came out worthy winners, 3 points to 2. 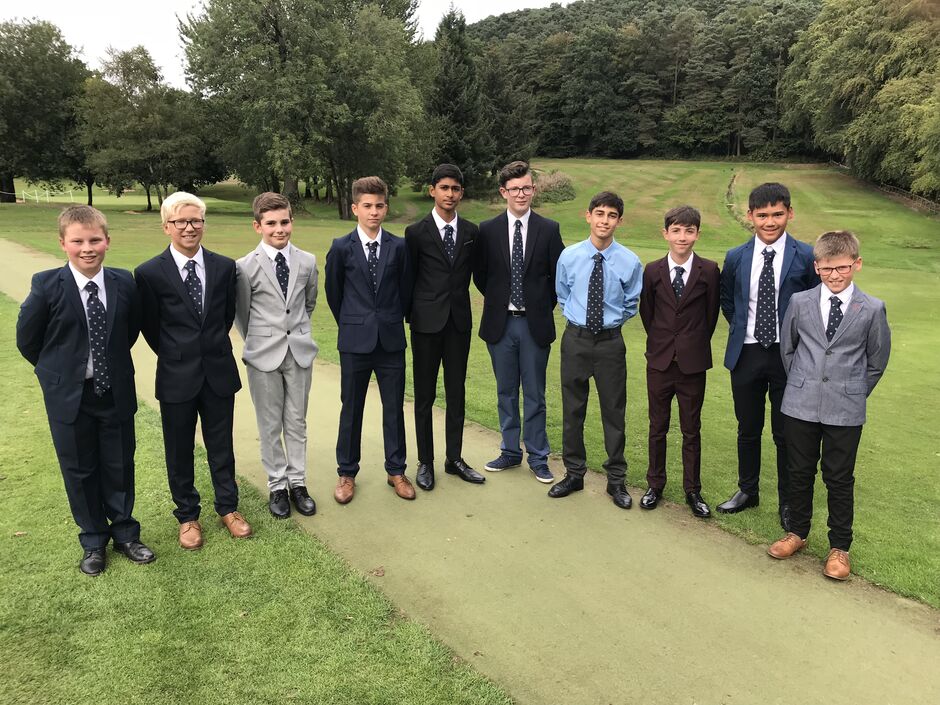 Staffordshire Under 14 Team Captain, Jenson Forrester had rounds of 61 and 56 to finish 9 over par to win the best score for 36 holes by 2 shots. 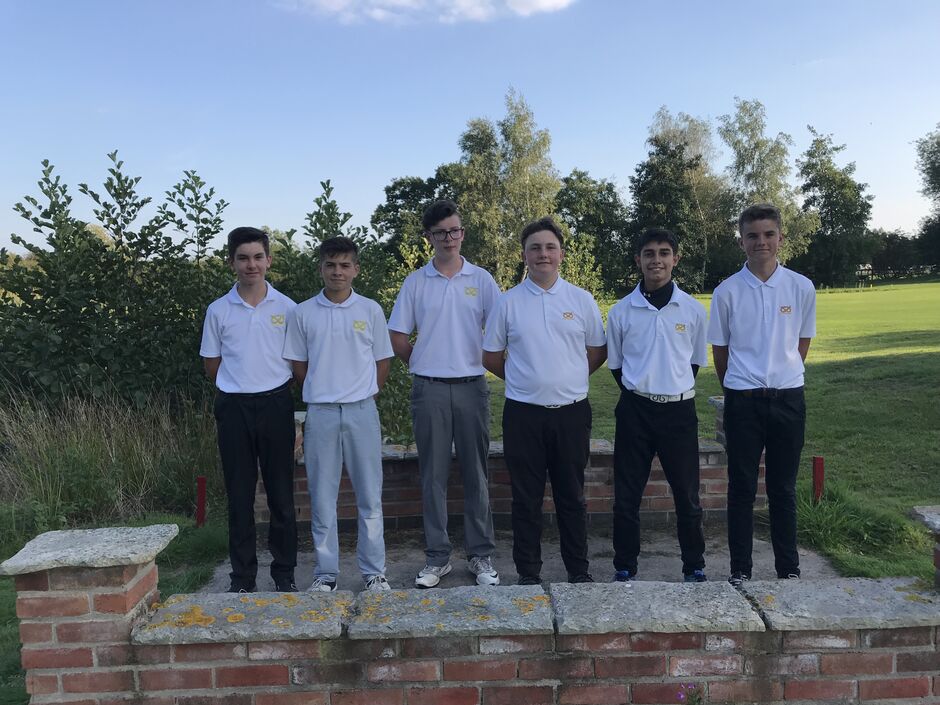 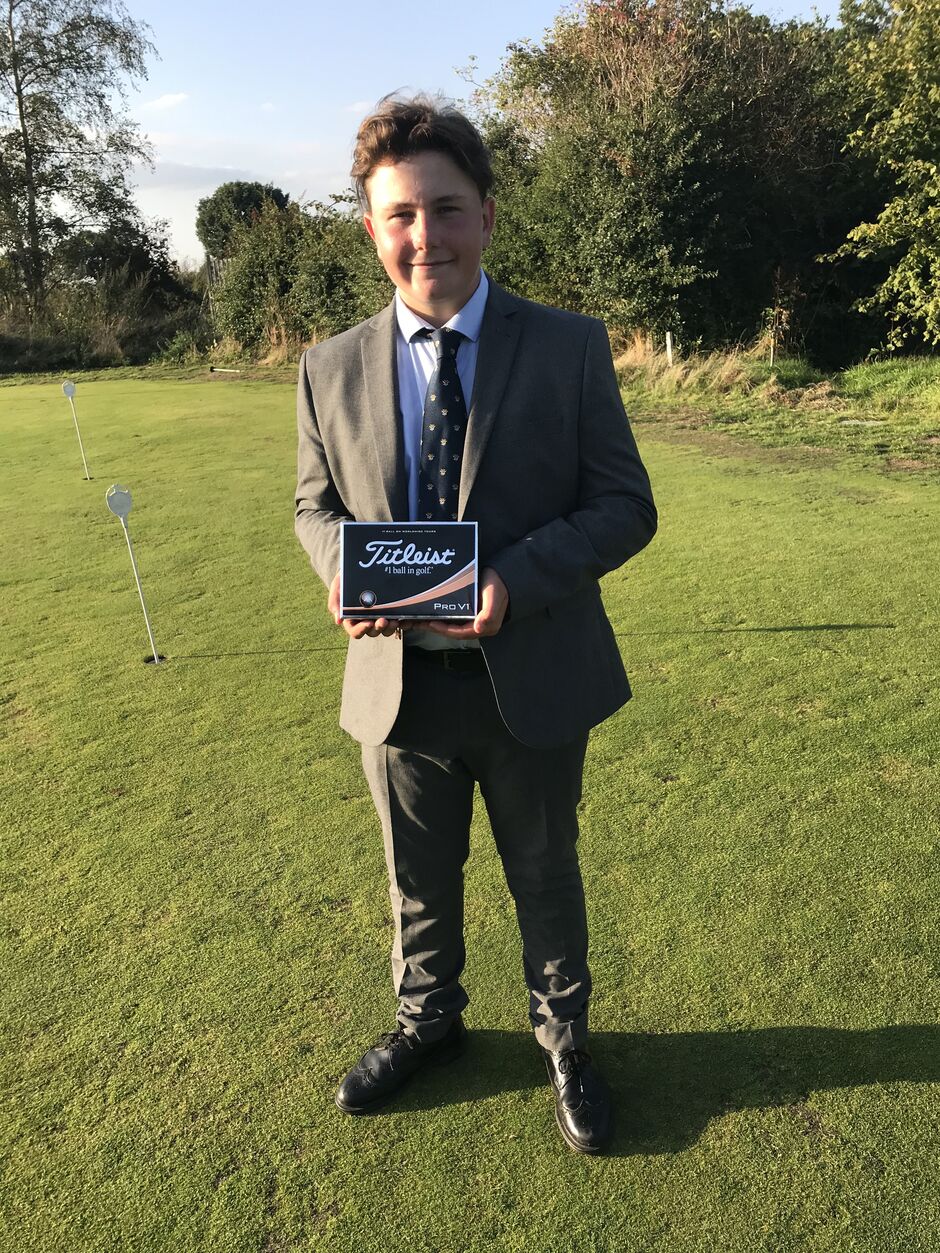 Staffordshire Under 14's took on Derbyshire, Nottinghamshire and Warwickshire in the 4 Counties championship at Broughton Heath Golf Club.

The first match on Thursday aftertoon was played in hot, dry conditions against Derbyshire. The match was comfortably won by 4 games to 2. No match going beyond the 16th hole.

Friday morning, full of confidence the boys took on Warwickshire. Matches did not go according to plan and we are at a loss as to explain how Staffordshire lost the game 6 - 0. Three of the matches finished on the 18th, unfortunately possible halved matches ended in defeats.

The afternoon match against Nottinghamshire would see the winners becoming runners up. Throwing off the disappointment of the morning the boys had a 5 - 1 win over their opponents. This time of the three matches that went to the 18th hole, two of them ended in Staffordshires favour. 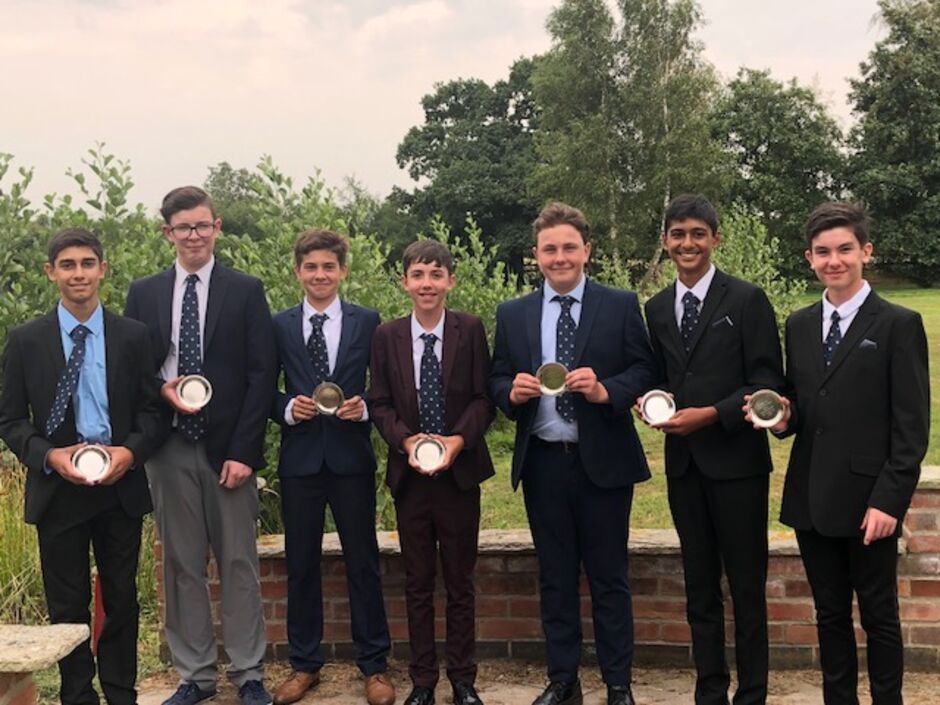 Staffordshire Under 14's welcomed the Warwickshire President along with the Warwickshire boys, at a very warm Stone Golf Club on Saturday, 19th May. Warwickshire, fresh off a win over Shropshire and Herfordshire, brought a very strong team, with strength in depth to play Saffordshire. The matches were keenly contested. The top match was lost 2 and 1 in a close match. Jenson Forrester and Josh Sepe brought the match back to all square with a 3 and 2 win. The third match, at one time being three down on the back nine, went to the 18th hole. A half was secured with a wonderful chip in by Satffordshire to halve the match. Shortly afterwards Staffordshire took the match lead with a good 3 and 2 win by Aarian Matharu and Ruhun De Silva, both making their county debuts. The result of the match hinged on the final match which went down to the final hole, which Warwickshire won, leaving the match all square at 2.5 points each. 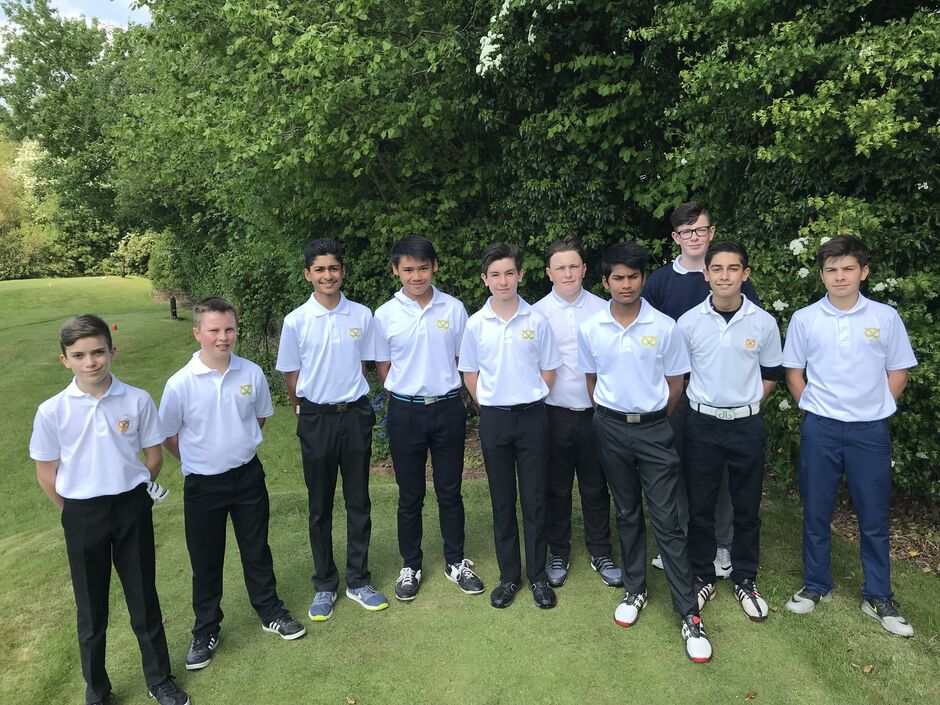 Staffordshire Under 14's took on Worcestershire in wet and blustery conditions at South Staffordshire Golf Club on the 10th September. In a keenly fought contest, played in good spirits, Staffordshire ran out winners 4.5 to 1.5 points. Three of the matches going to the 18th hole. The top two matches were won comfortably but Worcestershire in the third match fought back well to win a deserved half point. The fourth match went Worcestershire's way with the boys winning the last two holes to win by one hole. The score was reversed for the fifth match. The final match ended with  a five and four win to Staffordshire. 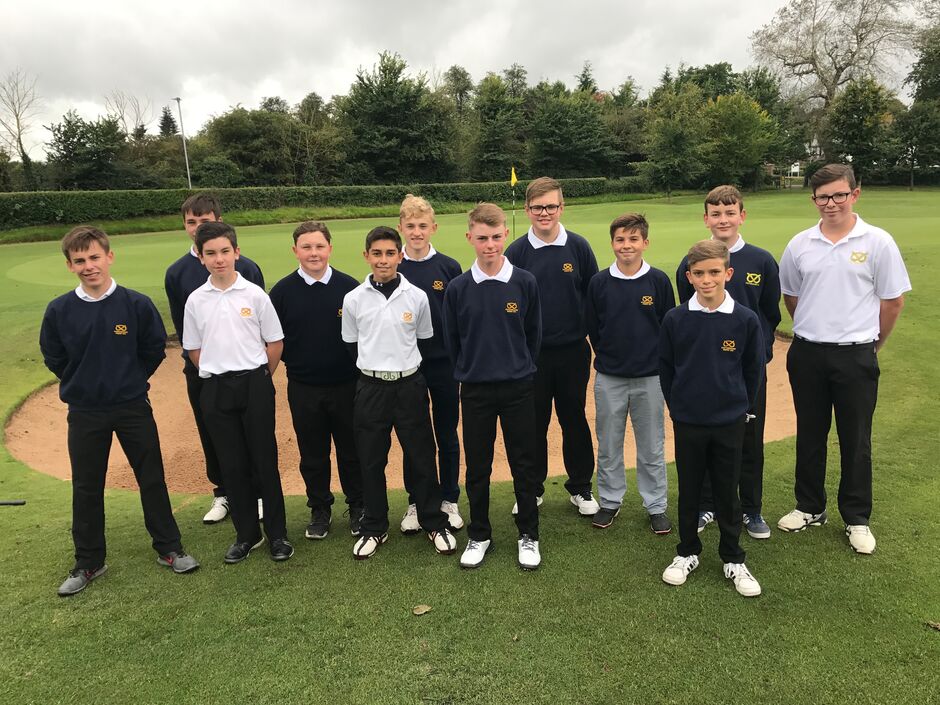 Saturday, 2nd September saw the Under 14's team take on the other 9 counties at Broughton Heath Golf Club. With the best 5 scores out of 6 to count, Staffordshire finished 5th behind Shropshire and Herefordshire, Lincolnshire, Nottinghamshire and Derbyshire, with a score of +87.

Well done to Spencer Worley who finished 5th overall with a plus 10 score of 118.

Congratulations to Shropshire and Herefordshire, winners with a +55 score. 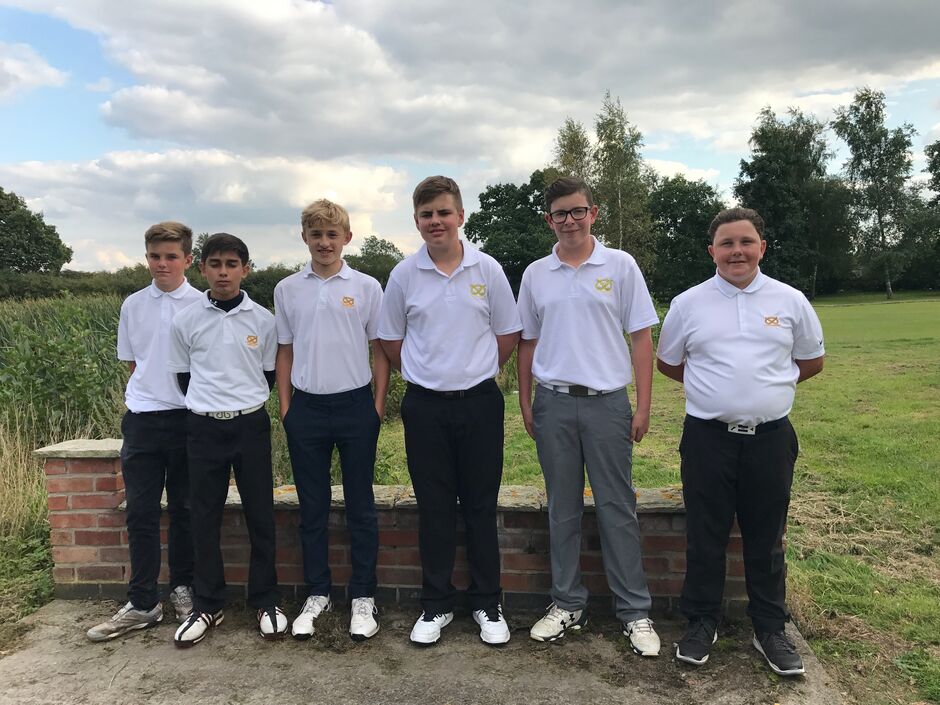 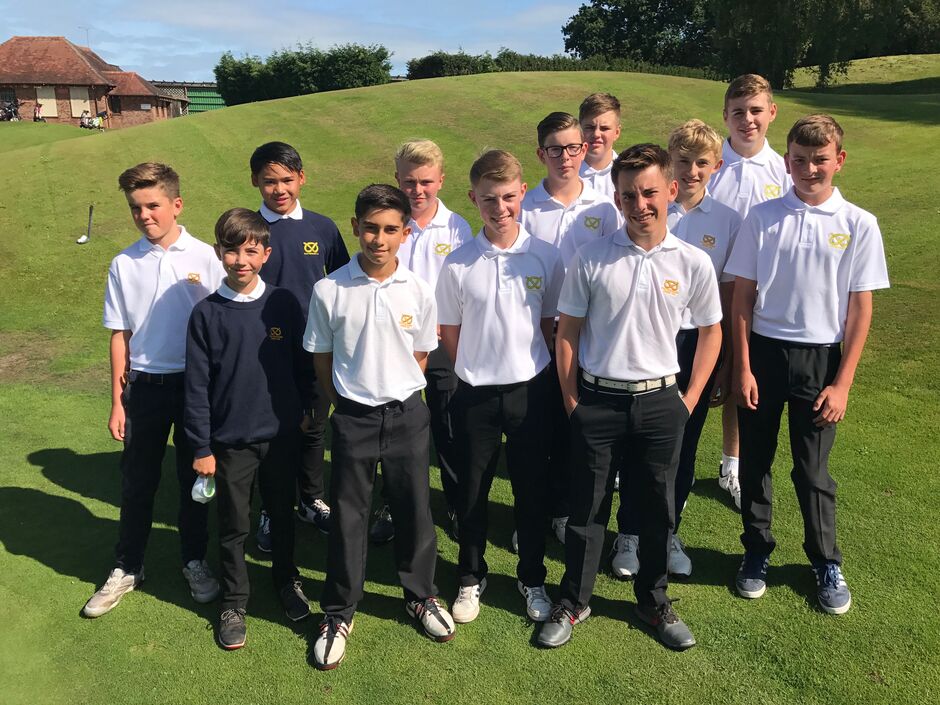 On a warm Bank Holiday sunday, the Under 14's took on Shropshire and Herford at The Shropshire Golf Club.

In a match played in good spirits by both sides, Harvey Roberts and Dan Porter put Staffordshire ahead with a convincing 4 and 3 victory. Ethan Evans and Spencer Worley fought hard, losing on the 18th hole. Shropshire and Hereford took the last games both 3 and 2 leaving Charlie Rimmer and Owen Mills to win their match for honours to be even. Charlie rolled in a four foot pressure putt to halve the 18th hole and to win their match. Honours even 3 each.

Staffordshire Under 14's took on Derbyshire, Nottinghamshire and Warwickshire in the Midland 4 Counties tournament at Broughton Heath Golf club on the 20th and 21st July.

Weather condition meant that the boys did not get to play a full practice round on the Thursday morning although the weather improved for the afternoon when they played Derbyshire in the first match. Staffordshire did not get off to the best of starts, with the top three games going the way of Derbyshire. The last three games saw an improvement with one win and two games ending all square. Derbyshire ending 4 to 2 winners.

Staffordshire needed to get off to a flying start on the Friday morning. In windy conditions they took on Warwickshire. A win would put them in contention for the tournament. The boys ended 3.5 to 1.5 winners. A win over Nottinghamshire in the afternoon would see the boys in with a real chance of being tournament winners. Unfortunately they ended up losing 4 to 2 against the tournament winners, Nottinghamshire.

Honours were even in a keenly fought match against Warwickshire at the Rugby Golf Club on Sunday 21st May. Staffordshire went to the 18th hole one down in both opening matches. To their credit both pairs won the 18th hole to halve their matches.  Five out of the six matches went to either the 17th or 18th holes.

The Under 14's started their season with a 4 - 1 victory over Derbshire at The Manor Golf Club on Monday 10th April.

Click here for the result of the score card. 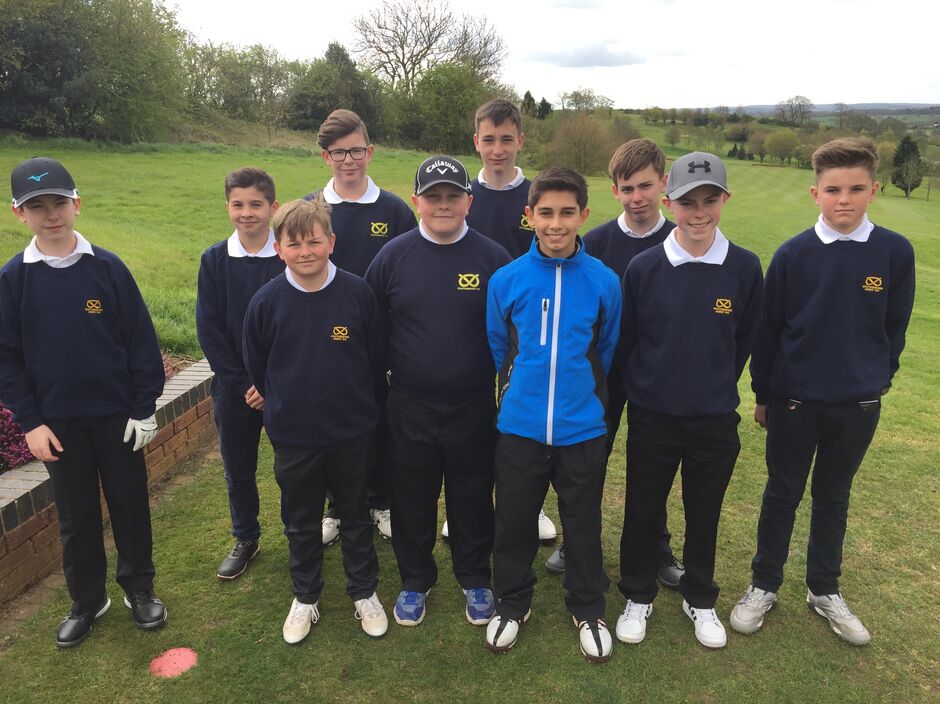 The Boys U12 & U14 Championships took part at Lichfield GC. 33 Boys played for the honour of becoming county champions. Some excellent golf was witnessed on the challenging course. 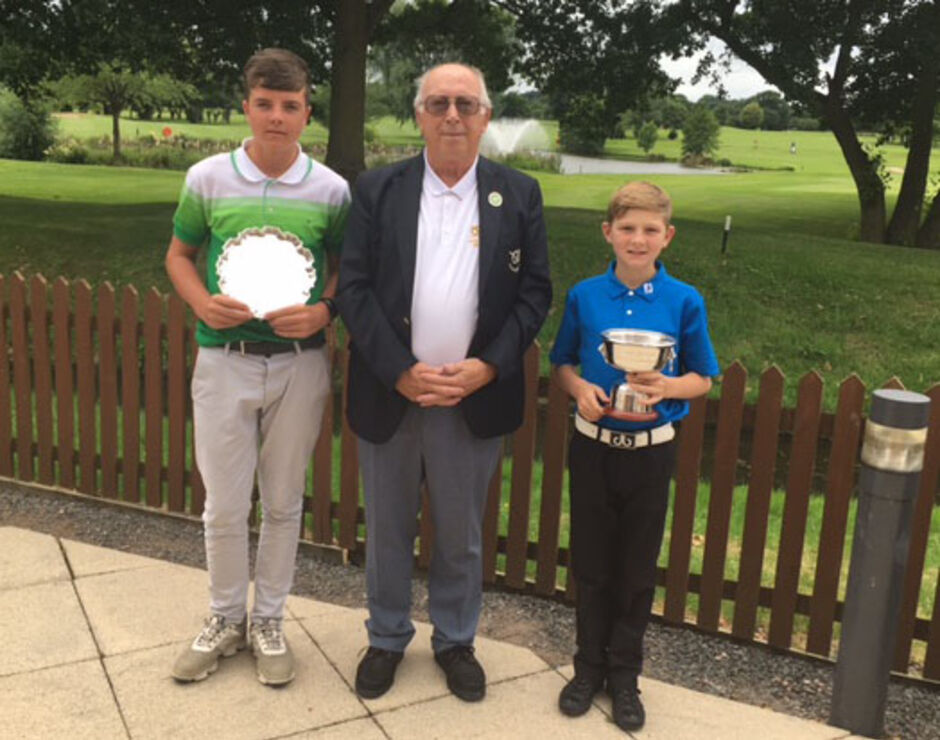 3rd place for Staffs Boys was a good effort, considering all the team were new to this event.

Full results of Staffordshire matches below. 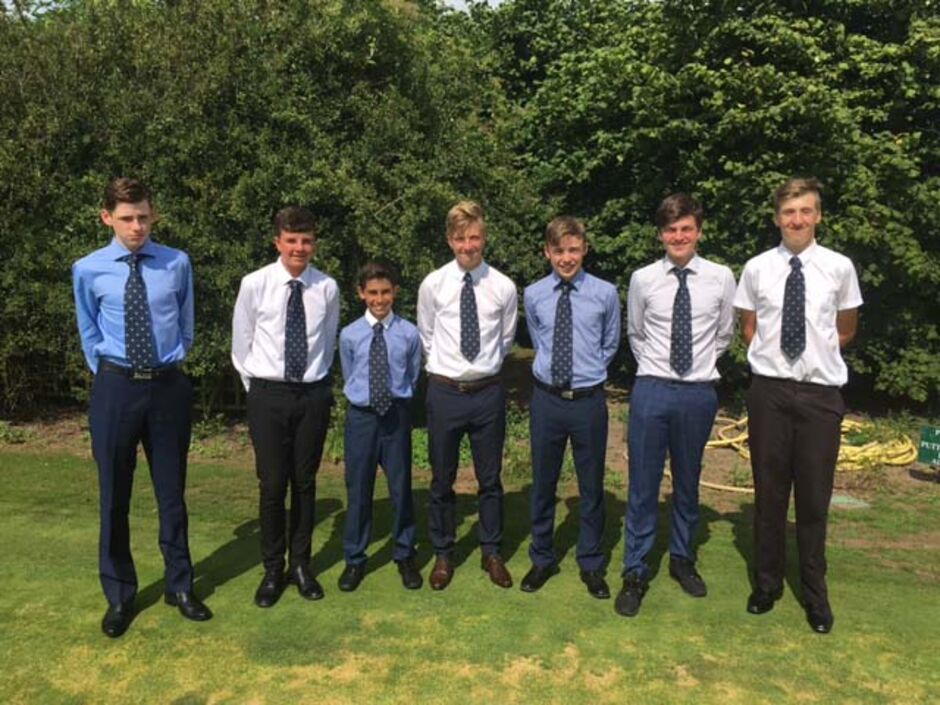 Well done to all the boys who did very well in trying conditions. Lightning forced them off the course for a while, and heavy rain flooded the greens. Lets hope for better weather in future matches.

A most enjoyable U14 friendly 4 ball at Patshull Park GC, on ane of the better days for recent weather finished 3 - 3.

For a number of boys it was their first outing for the County. Results & Photo below. 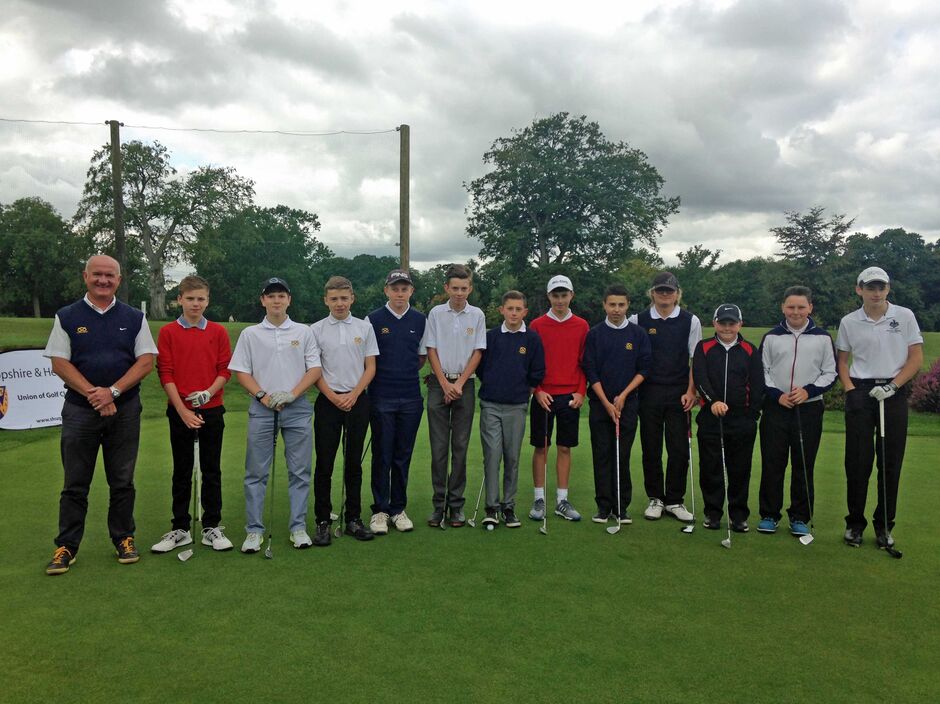 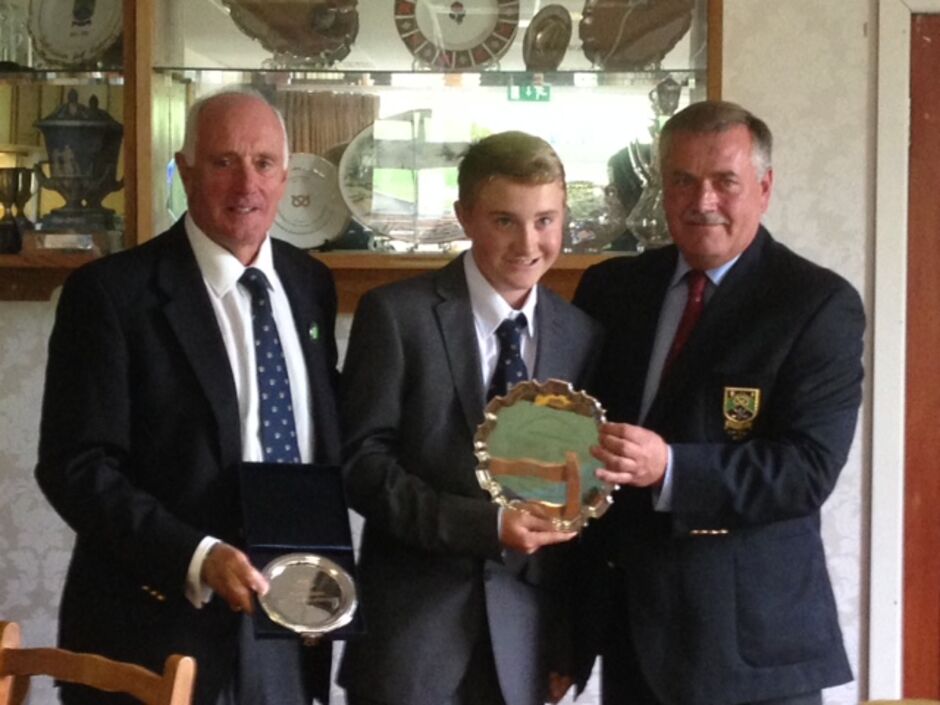 Well done to Staffs finishing in second place to a very strong Nottinghamshire team, who just pipped them by 5 - 7 points in the final match. Details & Picture below. 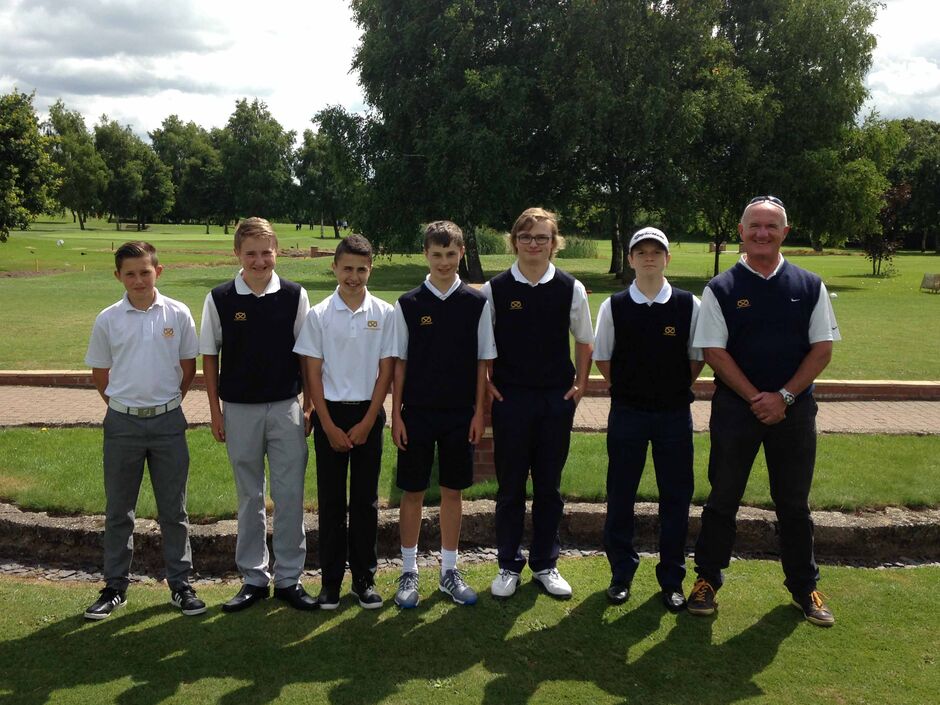 Congratulations to Staffs U14 Boys who beat Warwicks 7-5 at Handsworth GC Team picture below. 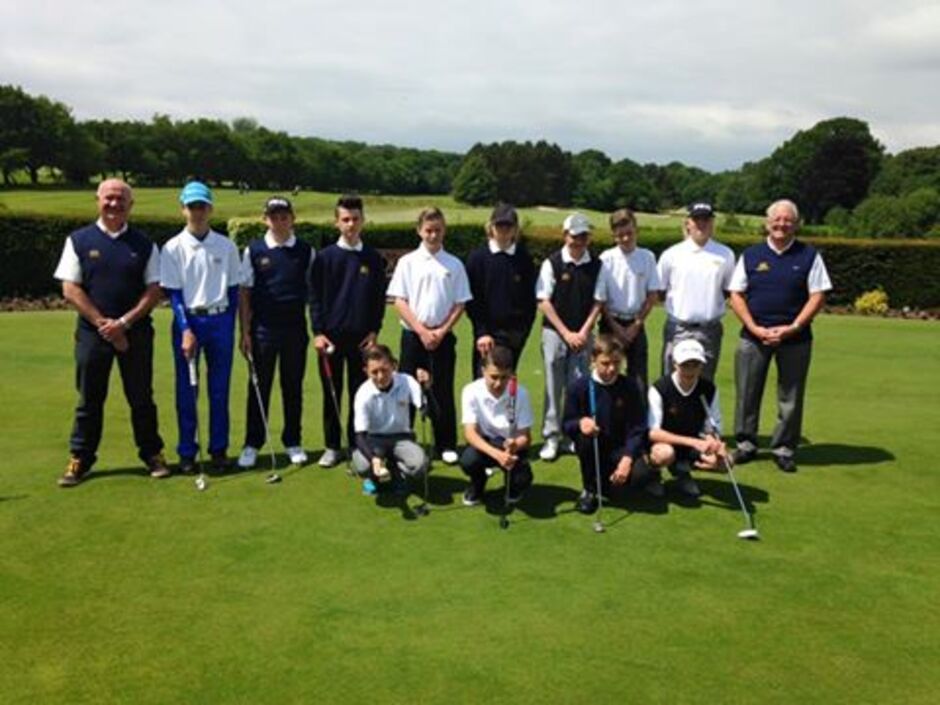