Shropshire and Herefordshire Boys take the victory in this well contested annual match. 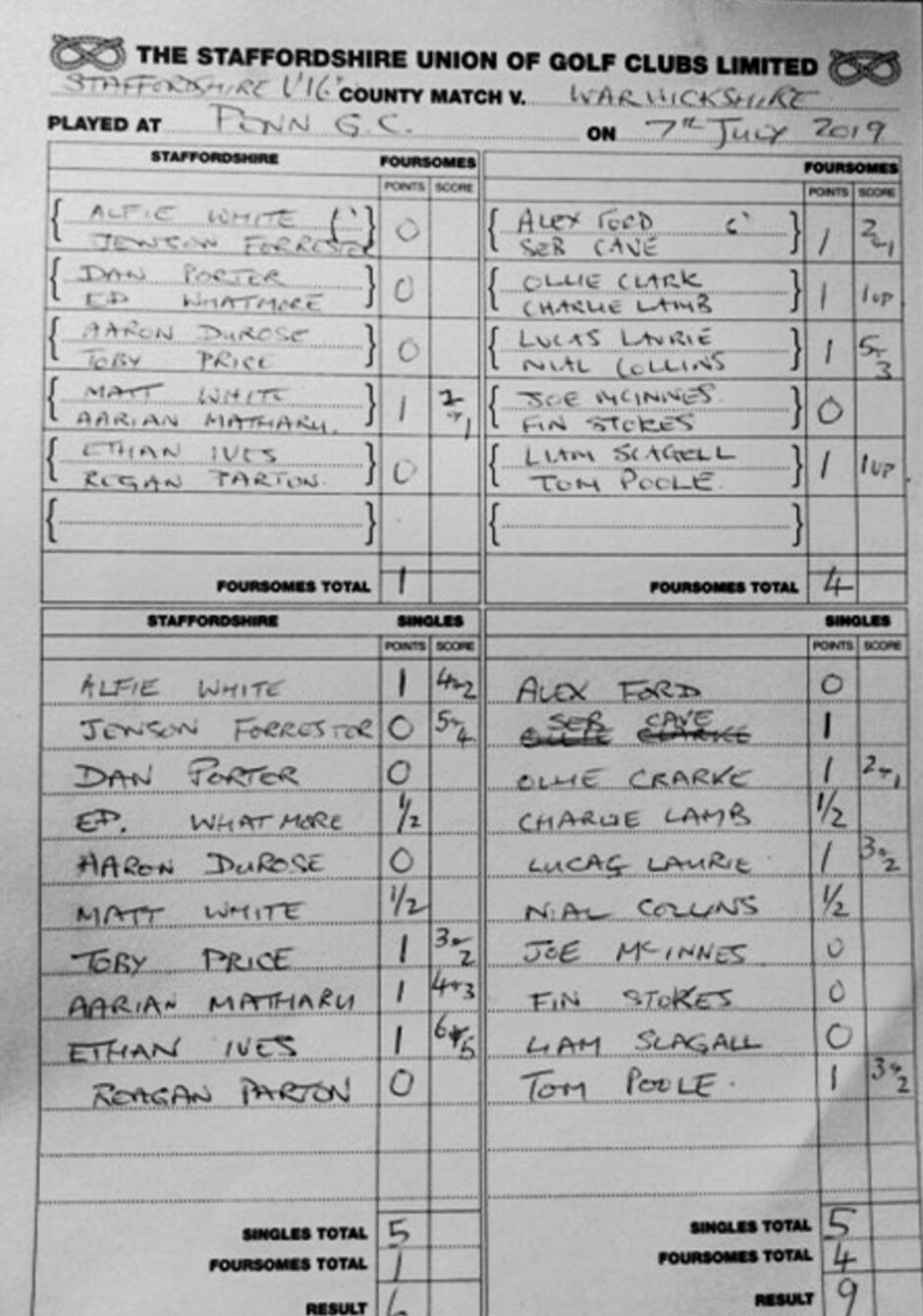 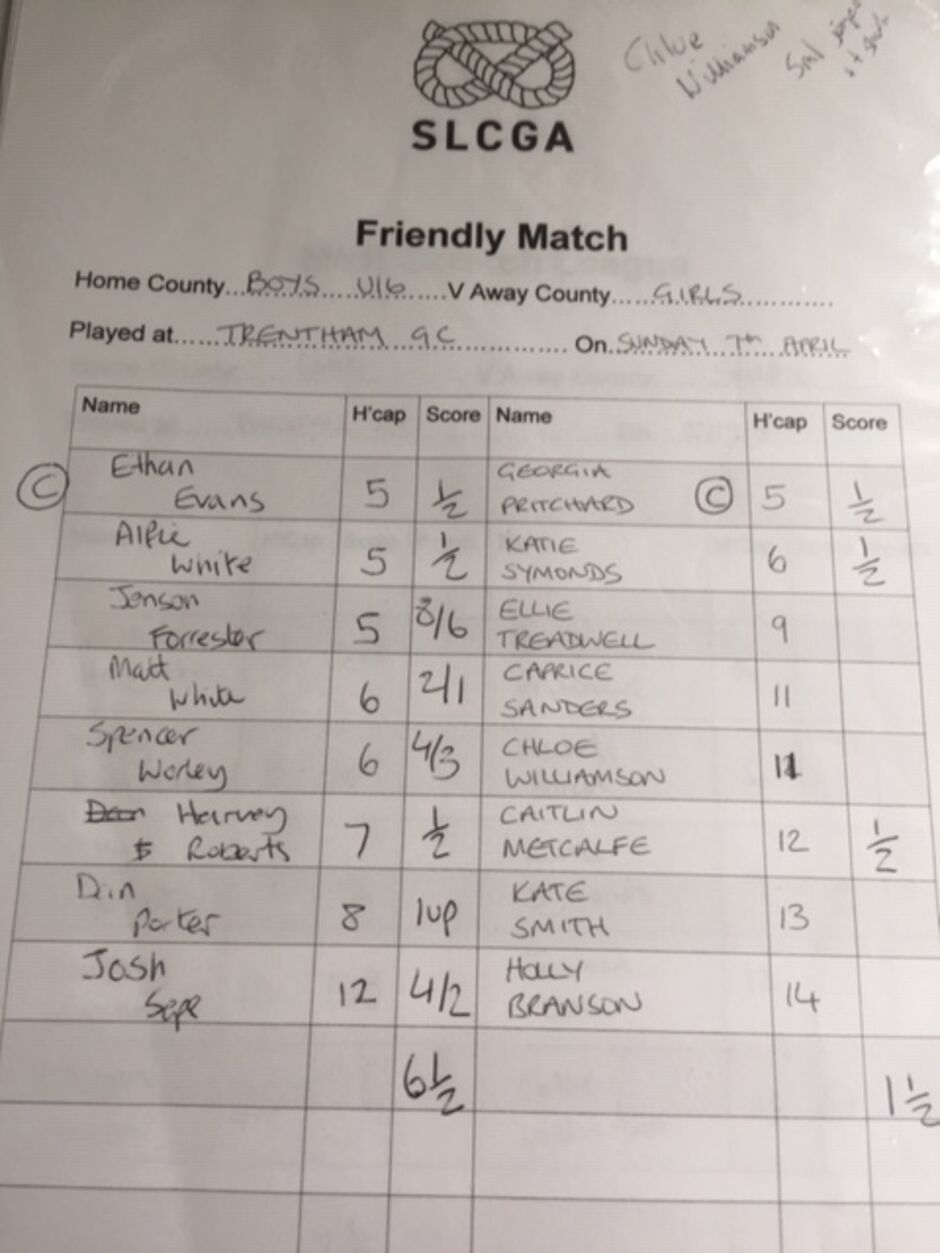 Disappointing to lose our only League match of the season. We didn't play well enough in the foursomes losing 1-4

Staffordshire U16s faced a very strong Cheshire side who all had handicaps of 4 and below. Staffs lst 4.5 to 7.5

Cheshire U16 v Staffordshire U16 at Shrigley Hall 13.8.18 Results Sheet.pdf

Another excellent win for Staffordshire U16's who remain undefeated this season. Well done team Keep it up!

Staffs U16 Captain, Tom Morton receiving the Snelling Trophy from the Captain of Lilleshall Golf Club. 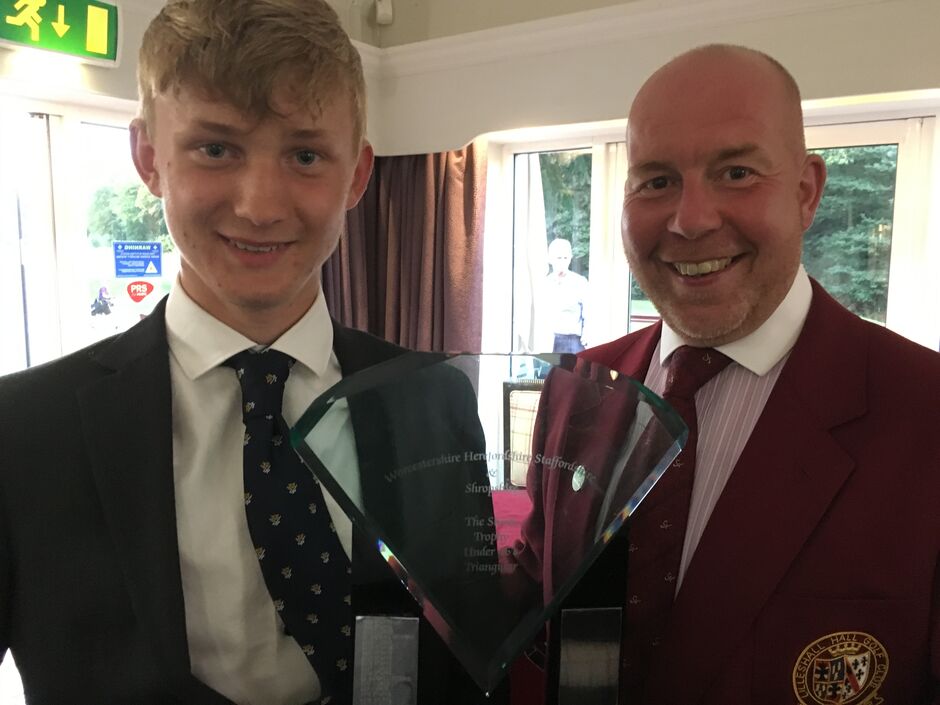 Fantastic match. Staffs having lost the foursomes 4-1  went on to take 7 points out of the 10 available in the singles to win the match 8 -7. 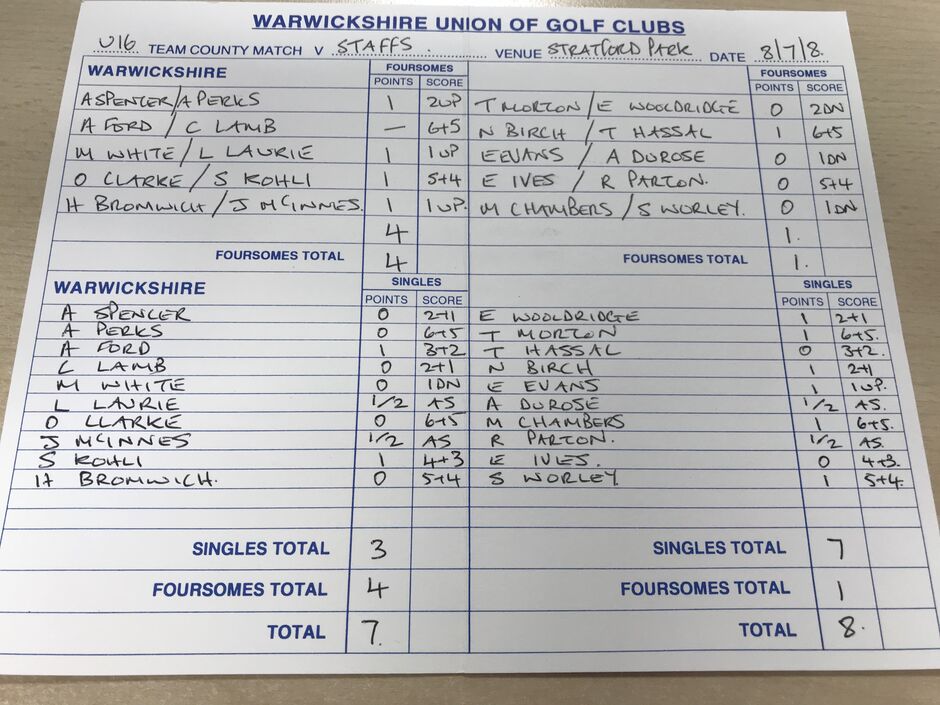 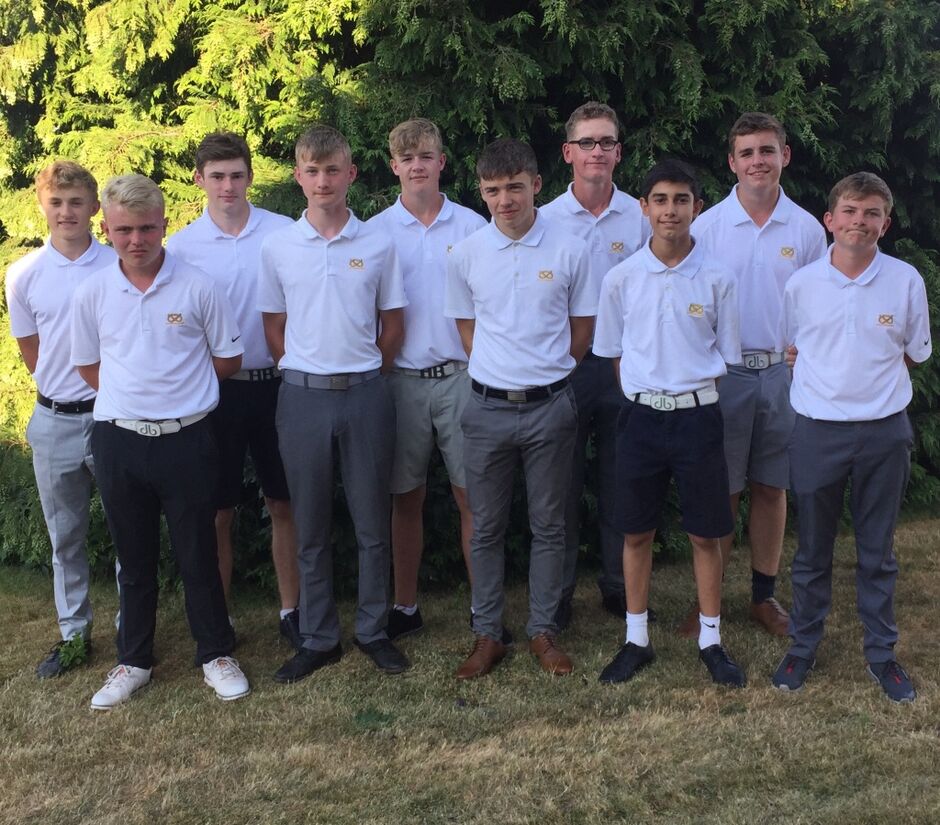 On a grey day and at a slightly soggy Trentham, 8 Staffs girls battled hard against the U16 County boys and came away with a well deserved halved match.  All pairings were played in great spirit and all bar 1 game the results were extremely close.  Well played to Morgan Thomas, Georgia Pritchard, Katie Symonds, Ellie Treadwell, Caprice Sanders, Jasmine Luo, Chloe Williamson and Oilvia Whittle. 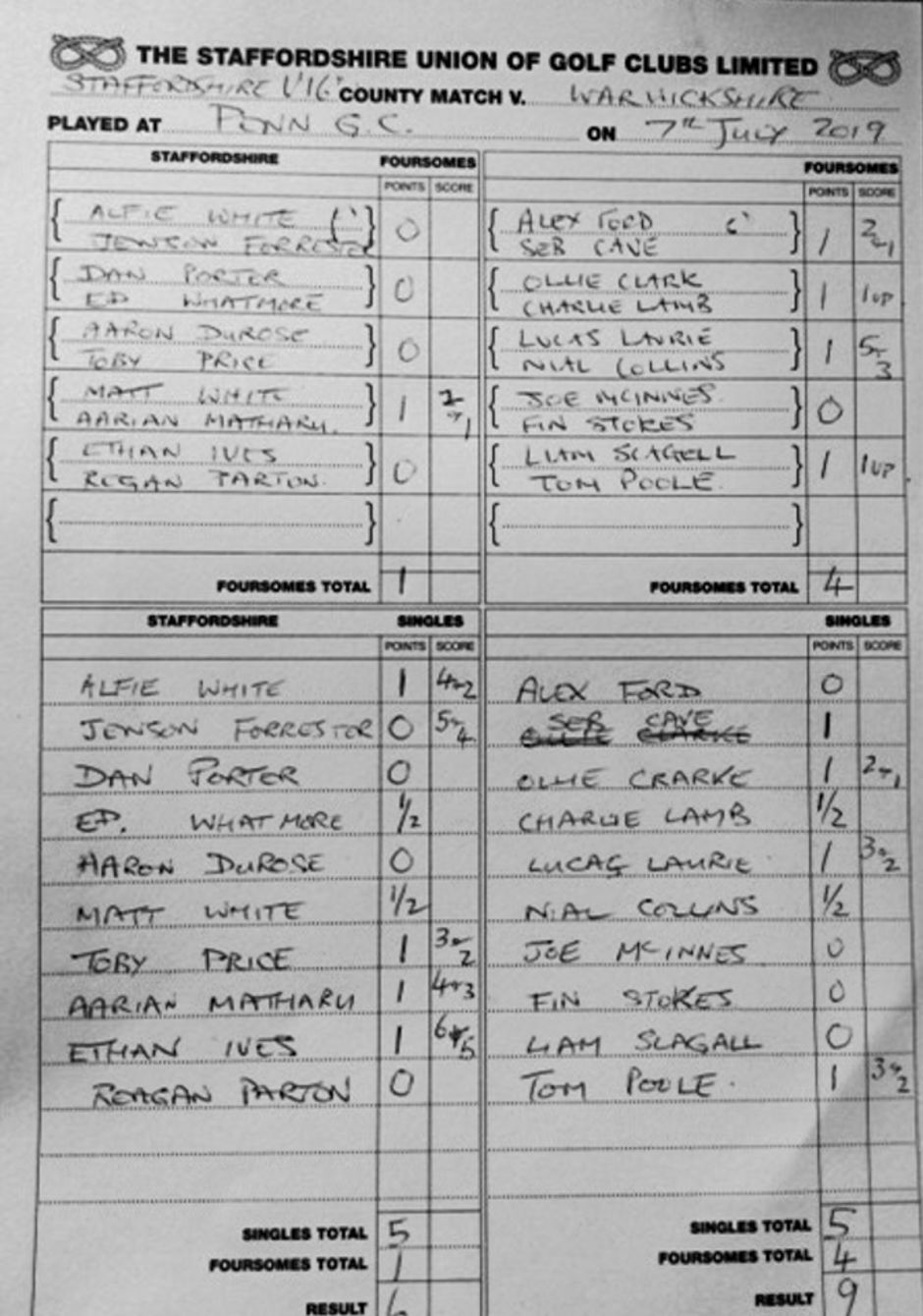 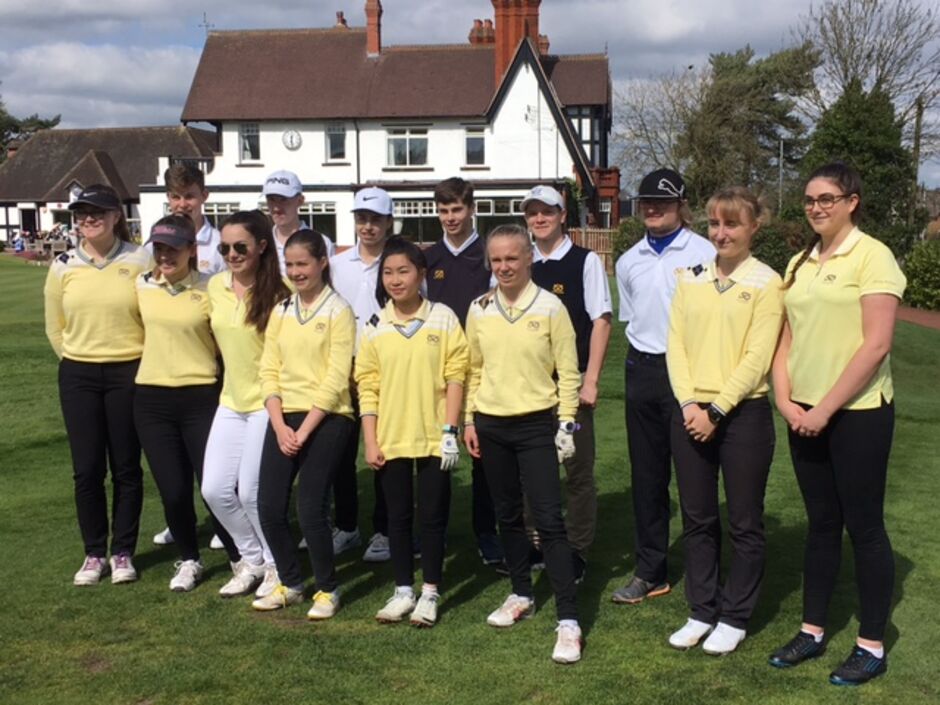 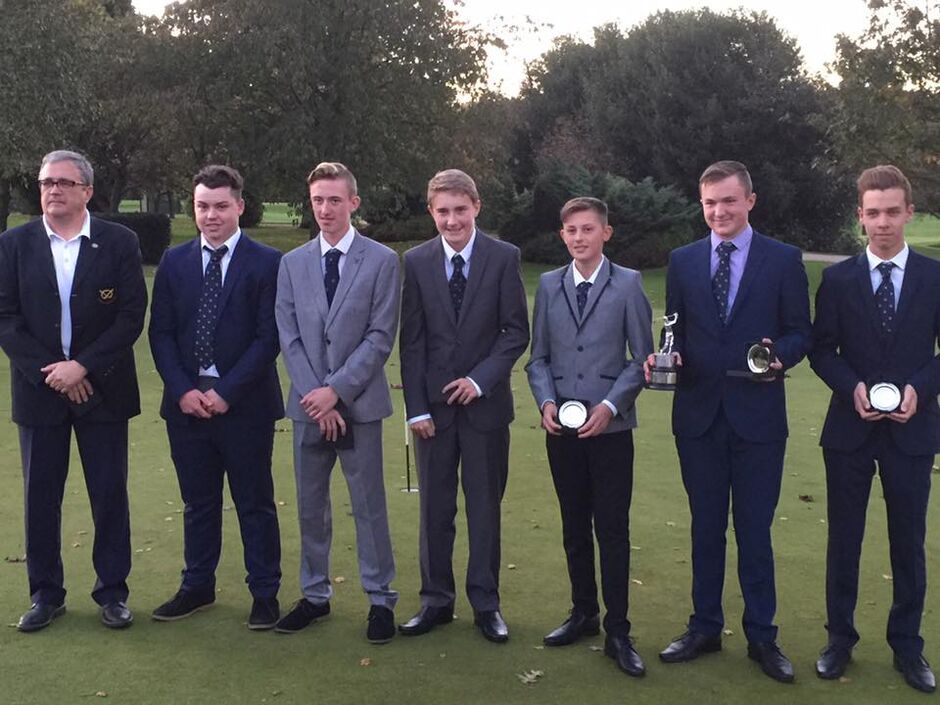 A very enjoyable U16 fixture over 18 holes of singles, provided good experience for the Staffordshire U16 boys.

This annual three cornered match was again enjoyed by all on a very well presented South Staffs GC, whose officials welcomed, fed and watered all three Teams on the day. Winners were Shrops & Hereford 20.5, 2nd Worcestershire 17, and 3rd Staffordshire 16.5.

Well done to James Bailey (Branston GC) who won the recent English School's U16 Championships held at John O'Gaunt GC. James scored 68,75 and has now been picked to represent England School's in an International match against Wales in August. 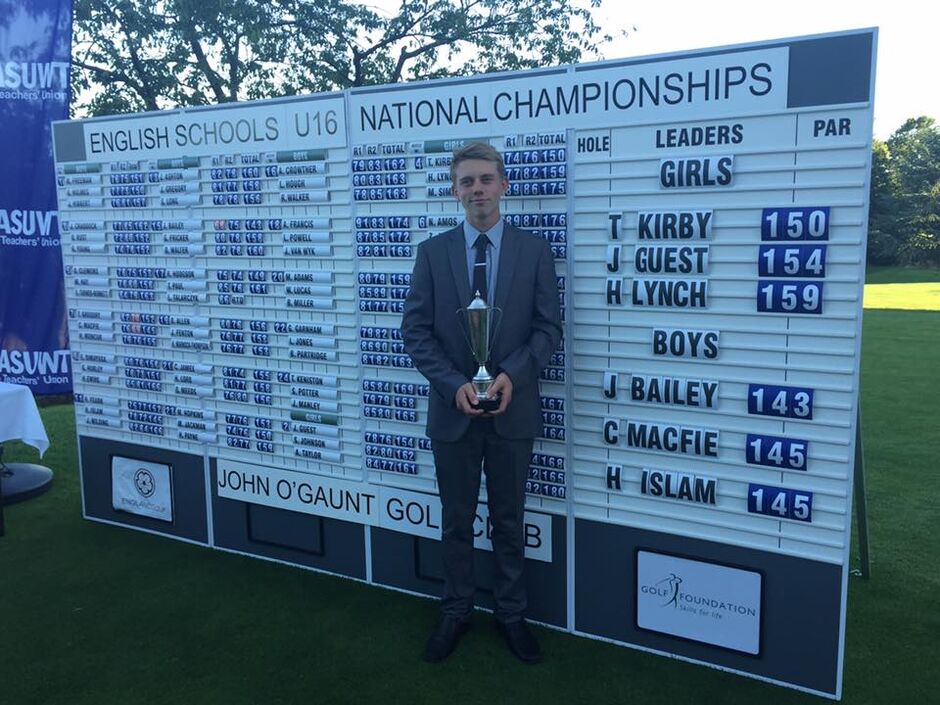 After a very promising start in the foursomes, the Staffs Boys faded to a share of the matches.

However, after a very strong performance in the Singles, Staffordshire came out as winners by 14 - 4. details below:-

The Winter matchplay knockout has concluded.

The winner was James Bailey (Branston) who managed to edge James Wilkes (Swindon) at the second extra hole as they were all square after the 36 holes final. He is pictured below being presented with the trophy by the Staffs Juniors Chairman. 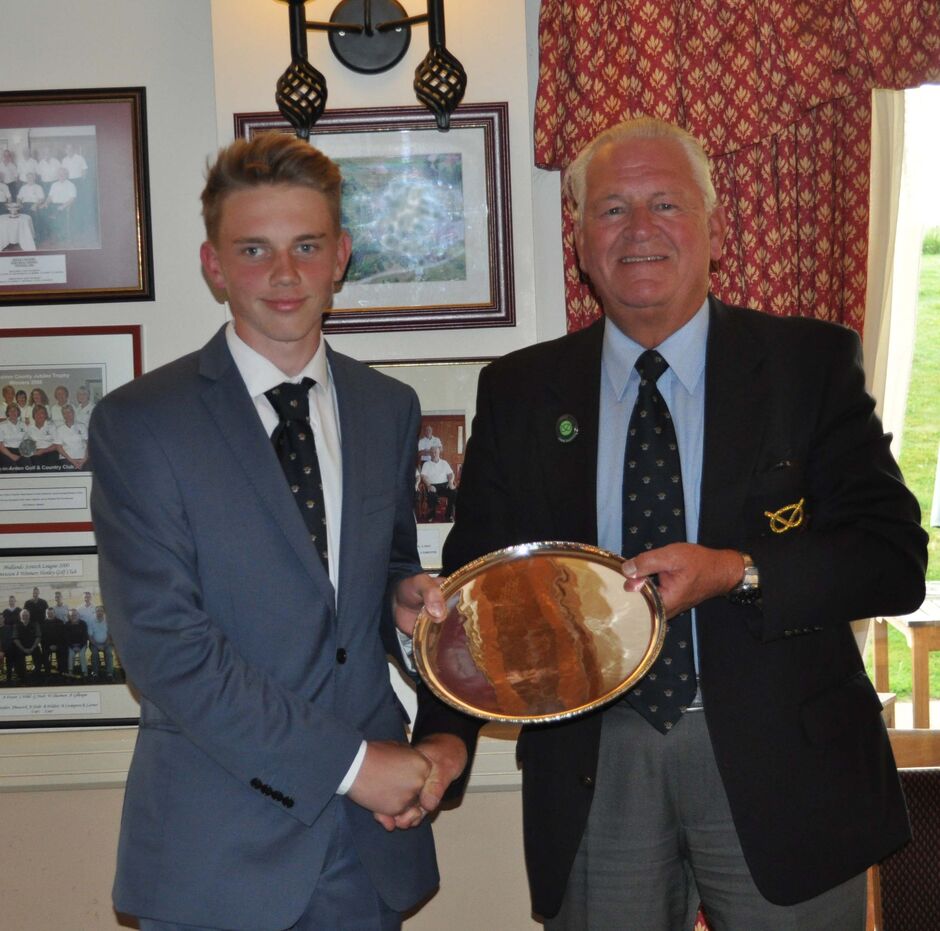 A very close match, with the result in doubt until the final stages.

The Boys had to pull out all the stops to claim a win by 6 games to 4. Full results below.

The second playing of this event brought some success for the Staffordshire Boys team of 6, who finished in 2nd place behind a very impressive Nottinghamshire.

With 5/6 scores counting the Staffs Boys scored as followes:-

They also collected the MGU U16 League Trophy, being unbeaten in their W Midland League during 2015.

Well done to all the boys.  Photo below with their RU Salvers & U16 League Trophy, & Team Manager Charlie Birchall. 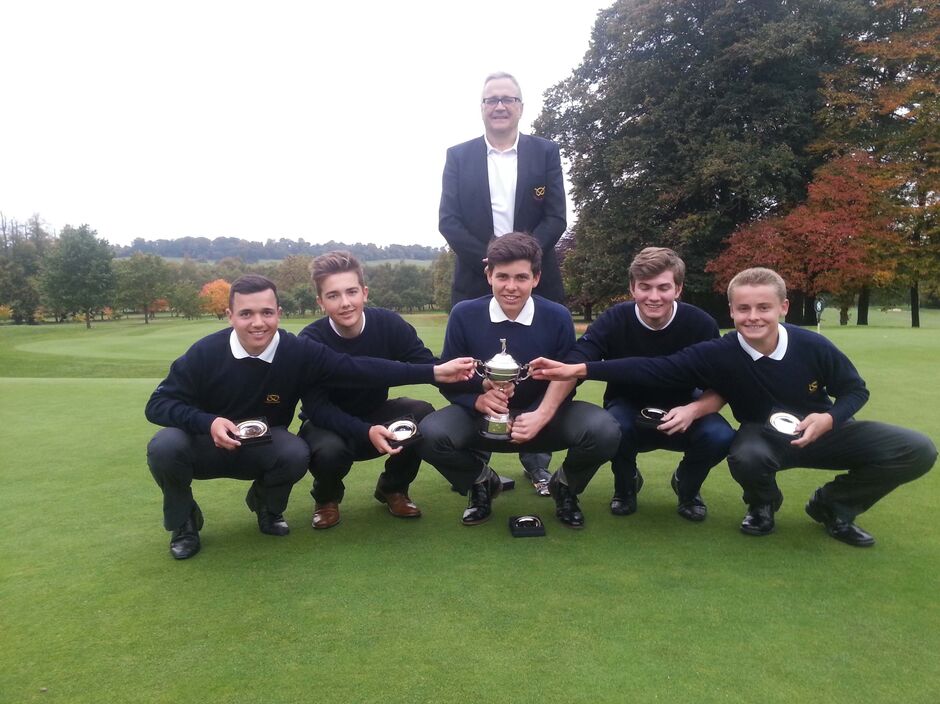 This was the re-arranged match, after the washout in the Spring at Trentham.

It was a very close match enjoyed by all, which the boys managed to win by 5 games to 4. 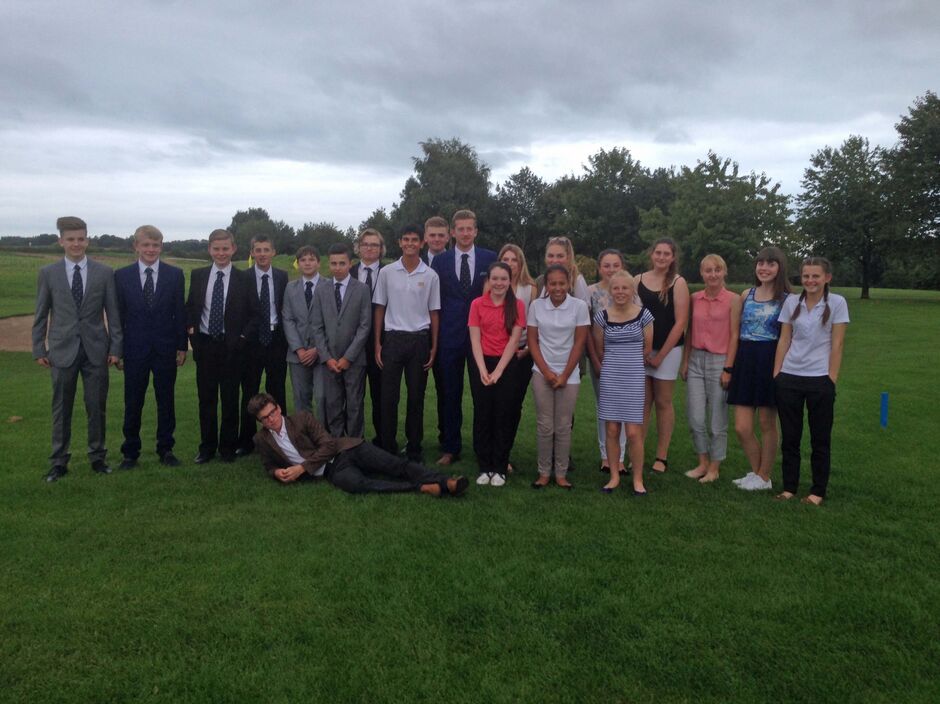 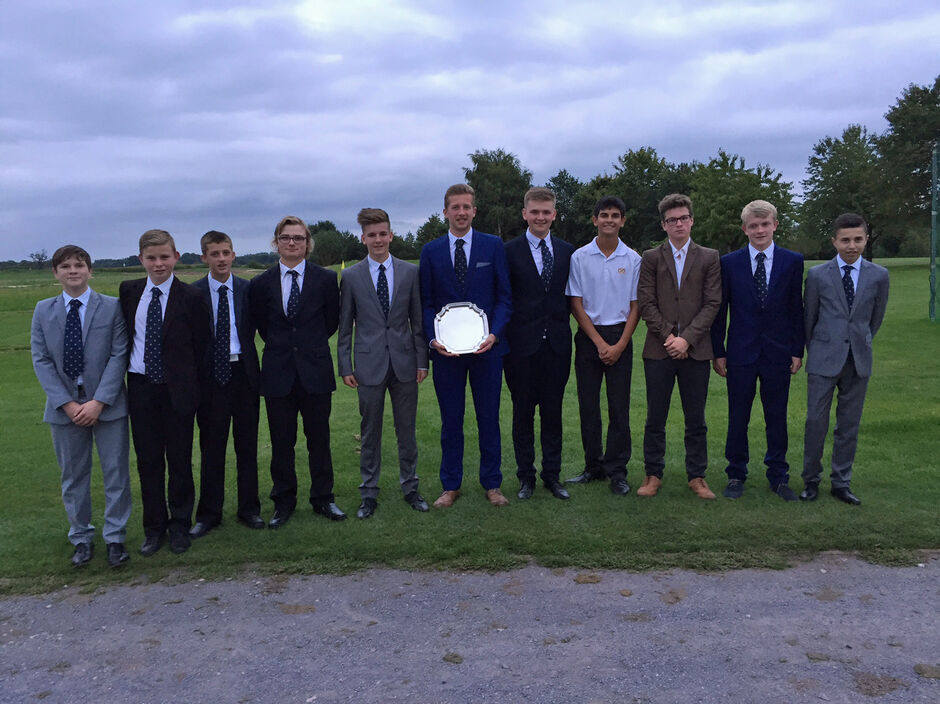 A very enjoyable, & keenly fought Tri-Match. Staffordshire managed to edge ahead of Shropshire in the last few singles matches in the afternoon to win the trophy, and post 2 wins in the U 16 MGU League. 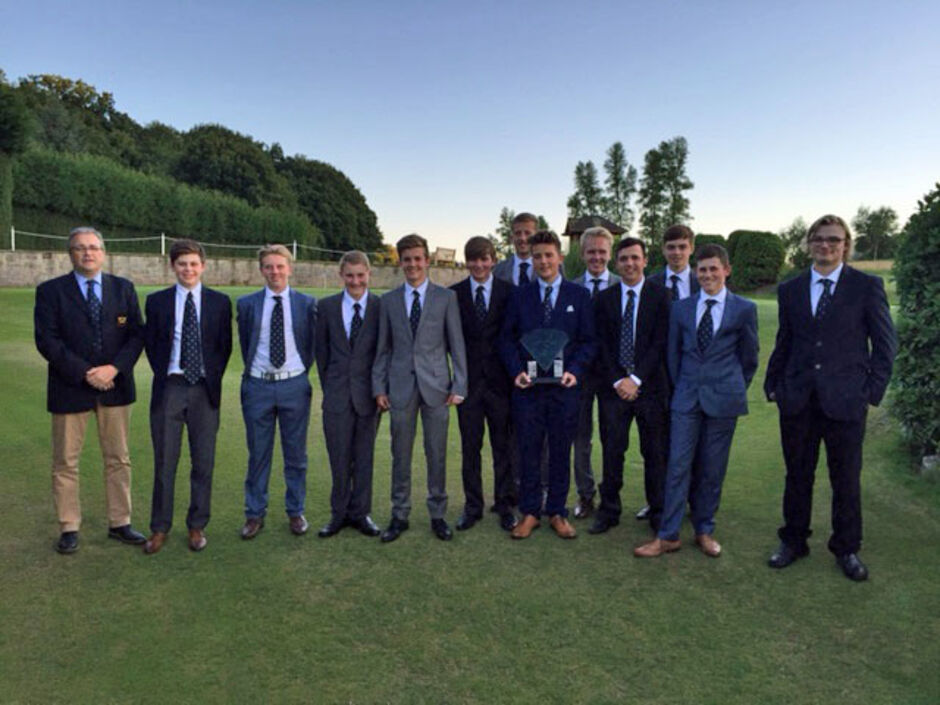 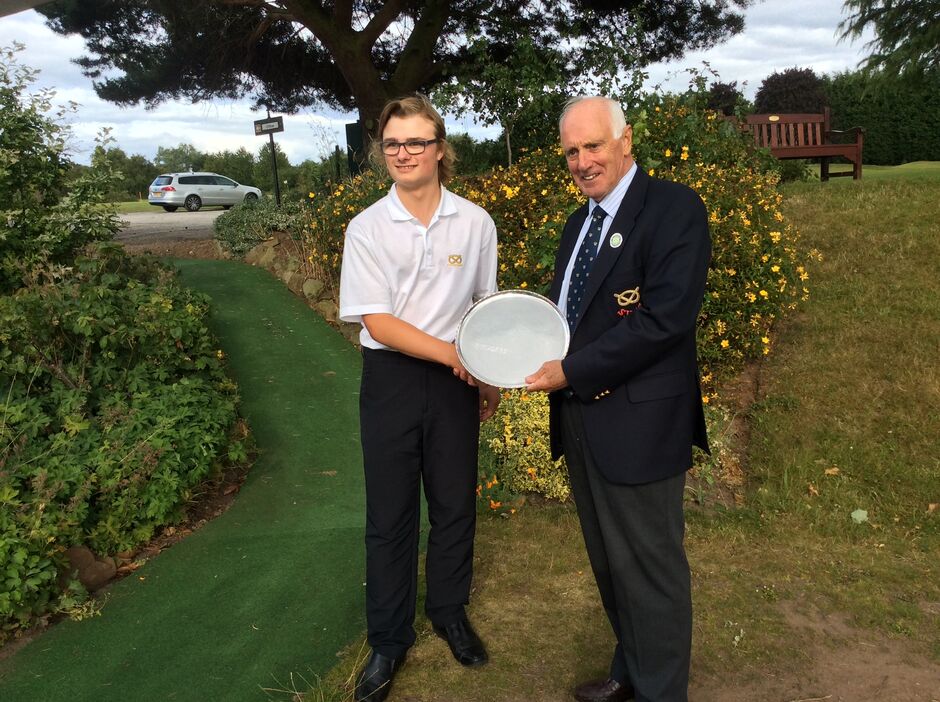